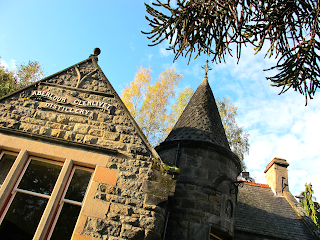 Because of yesterday's late arrival, we had not seen the crisp and beautiful surroundings of the Parkmore cottages earlier. With the sun shining and the surrounding hills covered in cold, misty clouds, this promised to be a beautiful day. Again.

Some of the early risers had already been running or strolling around in the vicinity, and when bacon and eggs were all eaten, we all were ready to start our second day of the trip.

One of the requests of the group when we were planning the trip was to see the insides of the Aberlour distillery.
When we arrived - slightly on the late side, a couple of people were already waiting for us in the sunshine outside the distillery visitor's centre. After the Tomatin touch-and-feel-everything-tour of the day before, the Aberlour Experience tour was a bit standard with all safety measures, the no photography rule and the lack of a warehouse visit, but the group did not seem to mind and kept smiling the entire time. The extensive tasting of no less than six different expressions, broadened those smiles even further, although most of the group mentioned that starting with a full-strength new-make might have numbed their senses too much to enjoy the rest of the line-up. 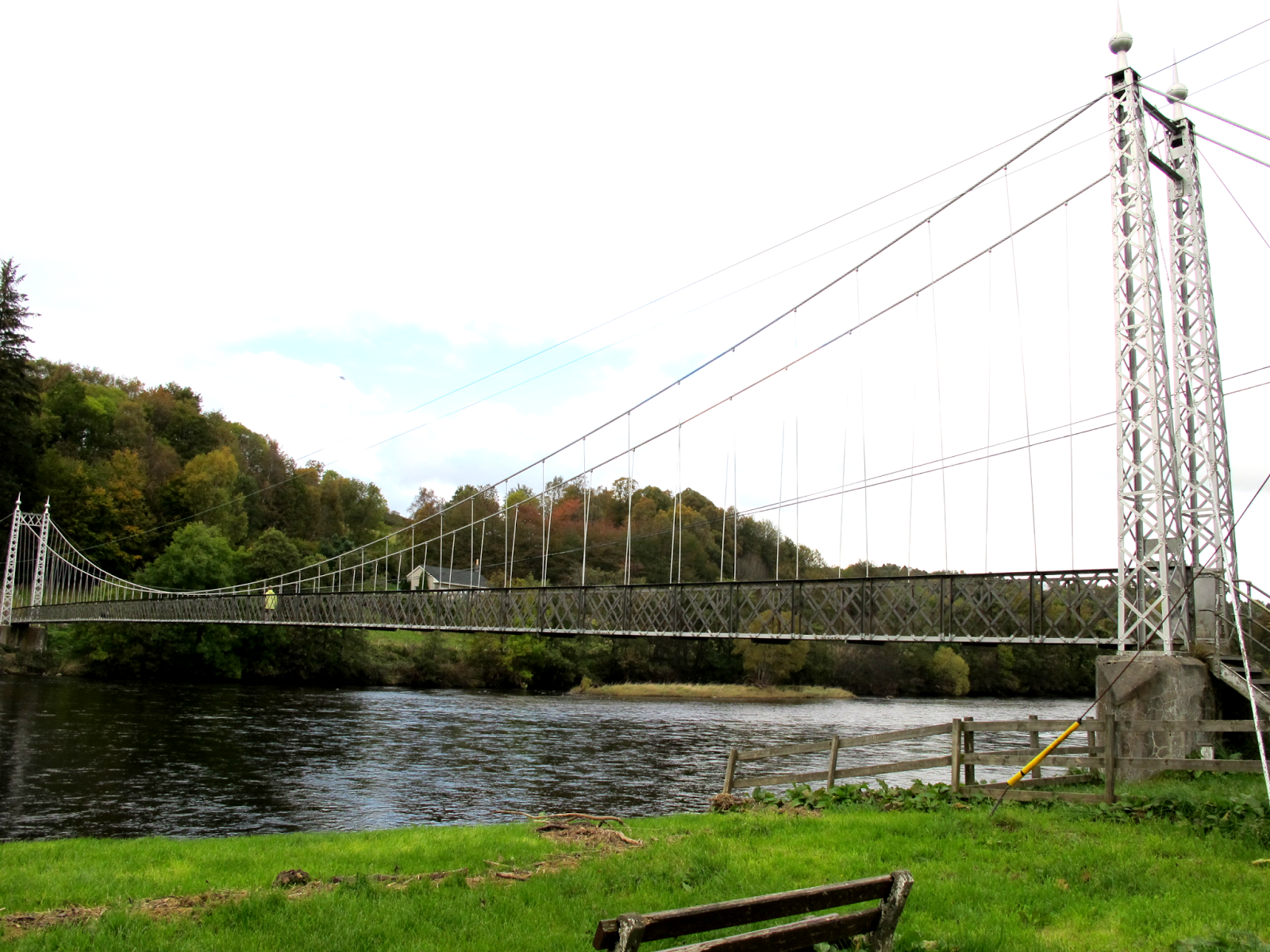 Still, the bottle-your-own option was welcomed with open arms, and more grins were added to some of the faces. Hugging the protecting wooden box, we left the car at the distillery and walked to the the Mashtun, a three minute walk in the little village of Aberlour.

Apparently, the Big Mash burger on the menu looked appealing to all eight of the group (and it was), and with the necessary beers and cokes (someone had to drive), the comparison between the two distilleries [Tomatin and Aberlour] visited started - which everybody agreed that was impossible to do. The enormous in-depth and spontaneous tour at Tomatin versus the scripted - but still very nice tour at Aberlour are just two different worlds on their own.

After the big burger we needed a small walk, and the park behind the Mashtun offered us a good opportunity to do so. The Victoria bridge over the river Spey is a beautiful sight, with a beautiful story behind it, in short; James Flemming's (Aberlour Distillery's founder) provided in hiss will to replace the old and dangerous ferry across the river Spey. There was one Penny to be paid to cross the bridge, which gave it the nickname the Penny Bridge which it is still called today - although crossing the bridge is now free of charge.

After picking up the van at the distillery again, we drove to Rothes, where we had made an appointment with Forsyths Coppersmiths . With a GPS and eight drivers that all did not know the way, we got a bit lost around the wrong end of the village, but after being in all funnelling alleys and almost releasing the seven extra drivers, we arrived on the industrial site where the factory is located.

We were greeted by Richard Forsyth jr, who we had met at the Speyside Festival earlier this year. He had created some time for us in his busy schedule and gave us a nice presentation and insight of the magnitude of the company. Forsyths is a family owned company working all over the world, and besides creating distillery equipment, the also many different installations for the gas industry. Starting with a brief history of the company and what the different possibilities and set-ups could be, we quickly came to know that besides the Diageo owned Abercrombie coppersmith in Alloa, the company is just about the only copper-smith in Scotland producing distillery equipment in large scale for the industry. They can deliver anything from a single still of any size to a complete turn-key solution for a distillery in any size.

Walking around - dressed up in high-visibility vests and safety goggles, we were explained the various techniques and processes used in making different equipment. We were told before not to get in to most of the workplaces and only sneak-a-peak at the entrance of most of the doors because of the noise and the dangers for us as visitors (after all, it is a non-visitors kind of place), but in the end we followed Richard in an out of every building on the premises. We could clearly see the difference between the cheaper - spinned copper (from a competitor) and the more labour-intensive method where the copper is beat into shape in several stages, a method Forsyths feels most comfortable in using.

Everything we were shown gave us enough material to discuss about in the van ride back to Aberlour, were it not, that we would first stop for a unplanned picture moment at the picturesque Strathisla distillery, a walkabout to the Craigellachie bridge and have another go at the Highlander Inn for a dram or a soft drink of some kind.

Back in the village of Aberlour - where we originally would have stayed all day but we dropped a distillery some months before the visit in favour of Forsyths, we found ourselves once more at the Mashtun. Not that there aren't any other good foodchoices in Aberlour, but we had made an appointment for a whisky paired dinner there starting with their Locally Smoked Salmon Served with a Wedge of Lemon served with a Benromach 10yo. The Pan Fried Pork Steak in Pepper Sauce Served with Saute New Potatoes and Vegetables was paired with an Aberlour 10yo, and a Glenfarclas 15yo accompanied a Homemade Sticky Toffee Pudding. 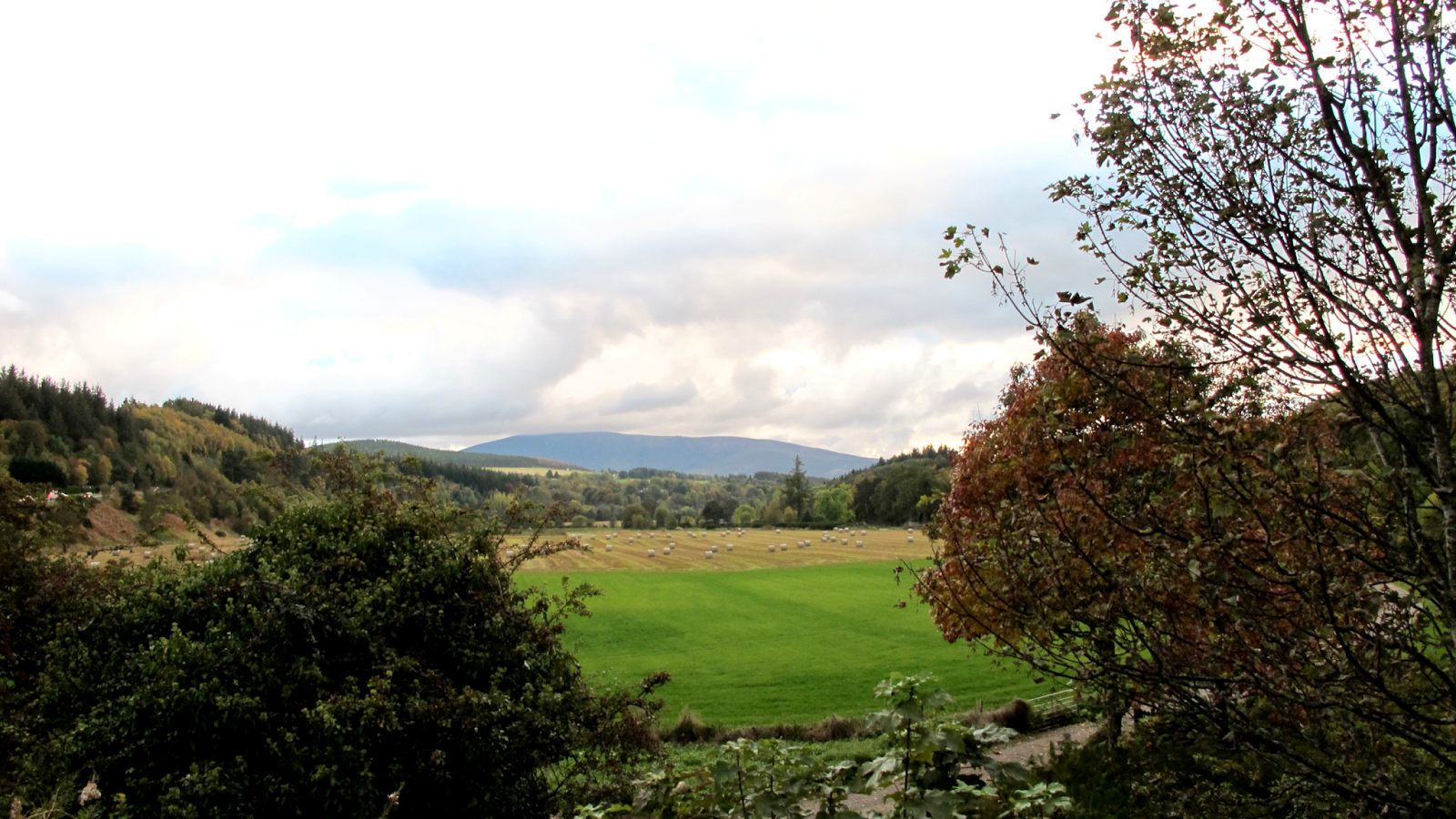 The food on itself was good, and there were no complaints about the whiskies either, but majority ruled that the food was too overpowering for the gentle whiskies and the discussion started about what we ourselves would have put on the menu, if we were to choose, what brought up an extensive debate about flavours and tasting notes in general, that continued for a while at the kitchen table at the cottage.

Reactions from the group were once more fantastic, and we ourselves could not have hoped for a better day. Second day of the trip was over, and it was another success. Anticipation for the third day was high, not only because this would be the heart of our little trip where we had build everything on...

More pictures of this day can be found here