The day before we had to go home again had arrived, and was once more planned with great events. When the breakfast was devoured again, it was time to get everybody in the van on time to drive from Dufftown to Tomintoul following the B9008 and the B9136. Not having visited, we trusted the GPS to get us there on time, and via this amazing route with beautiful vistas, we came to think we must have missed a sign at some point. Just when we were about to turn around at the next possibility, this possibility turned out to be the distillery, beautifully tucked away at the side of the only road leading to the village with the same name.

We were welcomed by Site Operation Manager Tom, who showed us around the place and explained the way Tomintoul Distillery works. We all were surprised by the capacity of this distillery. With only four stills, they produce about three million litres per year, but only a small percentage of what they produce is used for the single malt in their own name. Most of the malt gets tankered away on a daily basis, or disappears into blends that can be created at the blending facility on-site.

When showing the malt mill, Tom showed us the working of the wooden box, where the operators determine the ratio of the grist/flour/husk is what they are looking for. This was the fist time on this trip is was explained to the group, so for some it was the first time this made sense at all.

Everything in the distillery is mainly done manually. The huge 11 tonnes stainless steel mashtun feeds only six (also stainless steel) washbacks, from where the wash is collected in a wash-receiver and distilled in one of the two rather large wash stills. The two spirit stills are also fed by a receiver and release their juice is transported directly to the filling store close by. In this filling store, the distillery can fill their own casks with their own spirit, and empty matured casks for use in the company's blends.

The blending itself seems to be nothing romantic. Casks of malts are chosen and emptied in the filling room, pumped into one of the large silos and a certain amount of grain whisky is added to that same silo, following a strict recipe. Water to dilute to the required alcohol strength is added to the same silo and off it goes in a tanker-truck to a bottling plant. Some single malts that are sold in e.g. France or Italy (the infamous supermarket single malts) are mostly tankered away on full strength, and diluted in the country of destination.

Although the whole process in done entirely by hand, it is quite an industrial way of creating whisky, on a location that would not have been out of place in the Lord of the Rings and the Hobbit movie trilogies.

When driving away we noticed it already was 1 in the afternoon; time to arrange some lunch for every one. We continued on the road we came on and drove to th village of Tomintoul - the highest village in the Highlands of Scotland, a cute little town, with lots of options for lunch are and a whisky shop called The Whisky Castle. We visited this shop after the excellent lunch across the street at the Clockhouse, when everybody was seeing straight again after the generous pours of Tom, the towelled tour guide. The name of the shop suggests a much larger building than it actually is, but the contents matters, and we were not disappointed, looking at the largest bottle of single malt in the world (of course a Tomintoul) made the visit worth while for us. After a quick browse we went back to the van again, with everybody getting used to the idea of the (luckily short-term) missing items of one of our fellow travellers (in this case, the same bag as yesterday).

Driving through the hills and enjoying the great scenery on our way back to Dufftown, we passed the Glenlivet distillery, where we made a quick stop to browse in the shop and took some pictures outside. No time for a tour, because we had a goal set that was not achieved the day before after the Balvenie tour ran late; visiting the Glenfiddich shop for the bottle your own. Today we finally made it and the group surprised us by offering to pay for our own bottled bottle - for the organisation of this trip. An awesome gift that left us without words and slightly flabbergasted.

After everybody did their shopping we went to Dufftown to make a visit to a highly recommended butcher. Our personal chef offered to make us all dinner, and with the help of two sous chefs put a great meal in front of us with mash, haggis, sausages, black pudding with caramelized apple and a chutney of sweet red onions. 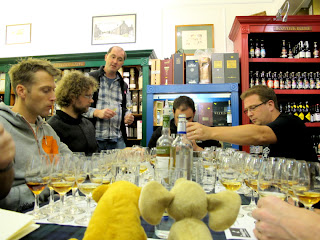 No time for an after dinner nap. After checking in at the airport (got to love the digital age) and a quick fresh up we went on our way again to go to Dufftown where Michael and Vicky Lord own the Whisky Shop Dufftown. They prepared a tasting in the middle of the shop where they set up a table with no less then 10 glasses waiting for us, called "Independence versus Unification". We had thought and discussed with Mike before that it would be nice to have a comparative tasting between official bottlings and independent ones, staying in the Speyside region, and not touching the distilleries we had visited earlier in the week. Mike had lined up sets of Linkwoods, Dufftowns, the Glenrothesses, Benrinnesses and Glenfarclasses. It was a great tasting, with some great laughs with Mike and his stories.

The next morning the weather looked good (again) and we packed the van with the suitcases. The Farmhouse was checked multiple times for purses, e-readers and whatnot's, and one of the guys did a good job imitating Freddie Mercury Wanting to Break Free - including the singing. Looking at our timing with some photo moments calculated in, we decided to treat the guys to a trip through the Cairngorm National Park. It is an amazing route that shows dramatic and harsh mountains. It stretches out and has lots of challenging summits. It is Britain’s largest national park, with an unique range of landscapes and wildlife, ruins, streams, rivers, and little, bendy roads, it all gives it a mystical feel, that transfers you back hundreds of years instantly.

Driving out of the mountains and into the hills toward Perth we stopped for some much needed coffee before we continued on our way to Edinburgh Airport. There we turned in the van, checked in the bags and relaxed a bit while enjoying a good lunch. After a short flight home we landed in the evening where a taxi was waiting to take us back home where plans already where made to meet soon again and share a dram.

Great times again in Scotland and we made some people see why we fell in love with this country, and we think we have warmed some of their hearts as well - they were already talking about going back and take other people along. Our first experience as tour guides came to an end, and we could only smile while falling asleep at home again, happy with the result. It is hard work, but it was great fun to do.