the Beast of Dufftown 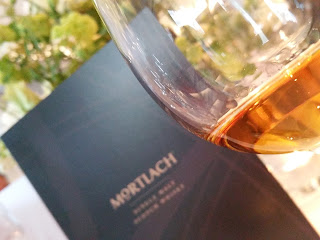 Over the past few years, we have tasted our fair share of Mortlach whiskies, and except for the rare Diageo bottlings, most of them were only available from independent bottlers, and most of the ones we have tasted we in private collections other than our own (hence the lack of proper notes).

Times change; Diageo announced mid 2014 they will be releasing a Mortlach single malt range comprised of three different expressions and a travel retail version, starting in the UK. Since the UK release there was a lot of buzz about the pricing, size and availability of the bottles, and May 7th 2015 it was time for the Benelux release party of "the Beast of Dufftown" in Brussels, and WhiskySpeller was invited to enjoy Luxury Whisky Ambassador Georgie Bell's presentation and create our own opinion.


After an exciting Thalys ride (exciting, not relaxing, but we promised ourselves not to say anything about the crying babies, the strange smells and the noisy, telephoning people), we arrived at Brussels-midi without incident, where a taxi was waiting for us to take us to the Sofitel Brussels Le Louise hotel where the venue was organised. "Tres chique"; a good thing we invested a little in a wardrobe upgrade.

A quick shower and fresh-up session later, we found ourselves in the bar downstairs, sipping a beer with Stefaan "Whisky with Friends" Lesage, after which we moved to the Salon Rose where the people Diageo Benelux was waiting for us with a welcoming glass of champagne. We finally had our first meet and greet with Mark "the Toshanman" Dermul, Ruben "Whisky Notes" Luyten and a fair number of people from different sides in the industry. Appetizers in various shapes and sizes kept coming by, and at some point we were offered an "Old Fashioned" cocktail built around - you guessed it, the first Mortlach we got to taste that evening - the Rare Old. 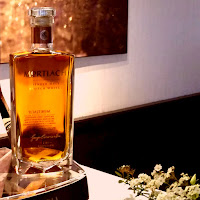 Before we dive into the details of the whiskies, for those who do not know Mortlach (shame on you!), until recently it was one of the best kept secrets of the whisky industry. Most whisky blenders knew about the brilliance of the character of the spirit and many used it to "beef up" their blends. Some of these blenders would every now and then sell a cask or two as single cask bottling, and therefore most of the whisky aficionados knew about the product and kept it to ourselves. As said, the whisky is now available as a single malt in three different flavours under their own label, in 50cl bottles with 43.3% abv.

So, the Rare Old, first presented to us in the Old Fashioned, then neat, and with a huge cube of ice (where we could play with an ice stamp to add the George Cowie & Son logo). The Old Fashioned was dangerously easy to drink, although to our taste the slice of orange skin could have been a little smaller (nitpicking here).

The neat experience was very nice and balanced, but the iced variation was a bit disappointing to us, now that we knew what was hidden in the neat version, was pushed to the background by the ice. Maybe in a different order, this would have fit better.

The Rare Old is comprised of "layers of ages and casks", where the younger whiskies are used to add freshness and vibrancy, and the older whiskies would bring more depth, and the four different cask types (ex-Bourbon barrels, first fill ex-Sherry butts, refill casks and rejuvenated casks) each add their own characteristics to the marriage. A well balanced non age statement whisky, for sale for around €70 (50cl). 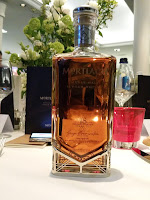 The second whisky of the evening was the 18 year old. Put together from a combination of first fill ex-Oloroso Sherry butts and refill casks, giving the 18yo has much more character and fried fruit notes as can be found in the Rare Old. A very exciting, beautiful expression, and for €240 (50cl) she exchanges hands with the better whisky specialists.

The third and final dram of the evening was the already renowned 25yo, matured in refill ex-Bourbon barrels for the whole quarter of a century.

Honestly. We have audio fragments to proof it. Georgie tells us about the composition and takes us through the tasting notes of the 25yo, and whenever she stops for breath, there is absolute silence in the room as everybody else is sniffing and sipping their glass. As the Toshanman put it: "I really wanted not to like this, but I am afraid I do". Well put, because this 50cl 25yo exchanges hands for about €786… 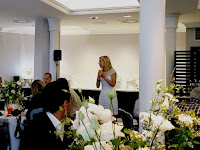 The evening was great. Good company, great food and fantastic drinks. The venue was über-chique, which reflected very well what audience the official releases of Mortlach are directed at: the wealthy. If you could spare the money for one (or all three) bottles of this, we certainly recommend you make some room in your whisky cabinet, because all three expressions are very ok.

The morning after, Georgie had agreed to meet up for a chat, where we asked her a little about the brand, herself and the future of both. More on that to come soon, so watch this space...