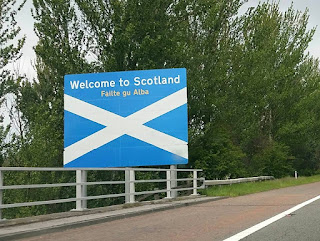 Plans for the Feis Ile 2015 festivities were made over a year before, where online chats began about the 200th year celebrations of Ardbeg and Laphroaig and how cool it would be to be able to meet all of the #WhiskyFabric people on Islay.

Most people we had met only online so far, and we were looking forward to taking it offline and get to know the faces behind the avatars a bit more.

So did the planning begin, and many of the so called #WhiskyFabric people planned to come to this little island of the West coast of Scotland. People making arrangements to stay together at cottages, tickets booked, and a #WhiskyFabric gathering set in motion for during the festival.

At the ferry from the Netherlands to Newcastle we met some of the Dutch people going to Fèis Ìle as wel. The days before we have seen posts come by online by other people already leaving so we anxiously counted down the minutes we finally could set off on this great adventure. 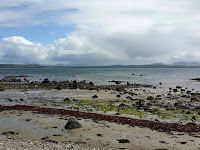 Arriving early on the Friday to take the ferry from Kennacraig to Islay, we soon encountered the first people and the fun began. A good ferry ride with some great views of the Kildalton distilleries when passing Islay to dock in Port Ellen, and then it was off to a nice lunch at Ardbeg.

Some quick shopping, exploring the cottage we rented with a couple of friends near Bruichladdich, and then it was off to the first Fèis Ìle event planned on the calendar: The SMWS Jazz night at Islay House, a great location, and with some amazing drams to share while listening to good music, and chatting up with some more people from the fabric. A great start of the festival week.

There were some events planned during the week, but we mainly wanted to focus on just going to the distillery days and having time to meet people. We knew we would have a great time, but we could not have seen it coming that it would be a constant stream of great memories made for life, making our own tartan, weaving in the memories and pictures.

From one moment having some tea at Martine Nouet's house chatting about whisky and other spirits while enjoying some stunning views of Islay, to having a little dance to the Skipinnish tunes at Lagavulin and meeting some great people.

The Bruichladdich Fèis Ìle day was the day we were looking forward to the most, due to almost everyone being there, and the masterclass with Jim was once again amazing. So the Sunday turned out to be a real rollercoaster with good drams, people, food, chats, music and lots of fun.

Every turn we made there was an online connection that became a meeting in real life.. It is crazy that you can talk to people for years online and when finally meeting it is one big chosen family gathering.

We enjoyed some great dinner at Bridgend after this festival day and looked forward to the rest of the week. How could this get better? Well, it did…

The monday was a day with not much on our itinerary, so we slowly went to Caol Ila distillery for the festivities, after having stopped at the Islay Woollen Mill for the purchase of some new flat caps. Enjoying the sun by the sea side, while sitting outside with some good food of the seafood shack and listening to some good music.

At the end of the day we got ready for what turned out to be our highlight of the trip until now: A dinner with some great people at Martine’s accompanied with songs by Norma, with a voice like an angel. A night where we could feel the friendships and passion for some good food, spirits and music. A great night we won’t forget soon and we felt privileged to meet these amazing people on this wonderful island.

After a good night sleep it was time to do an unplanned tour at Bruichladdich and then head off to Ardbeg (again) for lunch. Laphroaig day was the next place to be on this day where we planned to attend the “Legends of Laphroaig” event by Hans and Marcel where they talked about the new book to come out soon.

Having a walk around the distillery, chatting to some people, just hanging around waiting for the moment it was time to head of to Bowmore where the #WhiskyFabric gathering was planned later that night.

Meetings like this and the others we had in the days before are the thing we came to Islay for. The festival activities are also of course on the to do list, but mainly meeting of people was our main goal. It has been awesome for sure so far. We are just a bit overwhelmed to be honest with all the encounters, emotions and moments made for live.

So time to chill out a bit, while some of the people are already sadly leaving the island. Having a walk or two. Letting it all sink in, while staring out of the kitchen window with a cup of coffee in hand, looking over Loch Indaal, thinking back of all the great memories made and the moments of sharing the passion with amazing people.

But not to be worried that it stops here, ohno, there are still a couple of festival days left and more people to meet, so keep an eye out on our Facebook page for the latest updates and watch this space for the latest WhiskySpeller adventures.

Raising our glass to the wonderful #WhiskyFabric and we hope to meet you all soon again! Slainte!