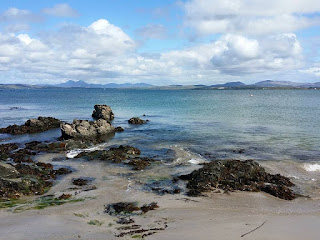 Our first time in Scotland was only in 2012. In our fully packed two week programme we had managed to squeeze in a two-night stay in a (great) B&B, see all of the eight distilleries and fall in love with the Queen of the Hebrides: Islay. This was at the start of our journey, and even without knowing what lay ahead of us, we already had the feeling we did not really want to leave again.

A promise was made that we would come back in several years, and explore the island a little more. Several years, mind you... So the very next year, we found ourselves in a small cottage in Port Ellen, just for the two of us, during Fèis Ìle: the Islay festival of Music and Malts. One whole week, and although we would be submerged in Festival activities, we probably would have some time to explore the island herself and enjoy some of the beauties she has to offer, right?


Wrong. Most of the time we - as whisky enthusiasts, were to be found at a festival activity of some sort, or we diverted to another distillery where there were not as many people as on the ‘distillery-day’ of that moment. We hardly saw anything of the beautiful scenery although the weather was good, and we had no complaints whatsoever.

2014 was an odd year for us. No turqoise waters, near tropical west-coast beaches, rocky coastlines, fairy forests, meandering burns or lingering roadsides that bring you to completely different sceneries from almost every corner you take. Still, a lot of fun (and a small incident) was to be had, but our hearts missed “Islay Time”. The Islay-wave. The roadblocks by the locals (read: the abundance of sheep and cows). The lack of ferries when a butterfly decides to fart. The complete absence of water pressure in the shower when it has not rained for 2 days and the loch on the hill is drying. The constant need of the locals to fix the island. We had missed that...

A good thing we had booked a large part of our trip to Islay for 2015 already and were anxious to get there again. Once more during the festival - highly anticipated by us and many others, because no less than three distilleries would have their birthdays; Kilchoman (10 years), Ardbeg and Laphroaig (both 200 years). We were ready to party…

Our biggest goal however, was not to go because of these parties, but to meet many of the #WhiskyFabric people we had only met once or twice, or only digitally. This started when we decided to say hi in the local whisky shop in Ijmuiden on our way to the DFDS ferry, meeting and chatting a short while with owner Richard before heading to the ferry terminal. From that moment until we arrived at our own front door again three weeks later, every single day we met interesting new and familiar whisky-minded people. Main goal: reached with ease. 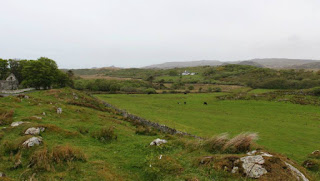 Another goal was to see something of the Island itself. We knew there were many places on the Island we had previously not visited, and we also knew that one could walk there for hours, be surprised and amazed by the different types of landscape. The island has a rich history, an enormous presence of flora and fauna and from the handful of people living on the island, each and everyone of them is as heartily as the next.

The festival week was great fun and feels like we are still recovering from all the experiences. We met many people, drank some of the local spirits, ate quite a bit of the local seafood and wildlife, had a blast at some of the parties, listening to some of the most popular Gaelic bands of this moment and queued for some of the festival bottlings.

But… We could pull almost everything there into a negative as well. At many of the festival days, there were the same local food-shacks to be found (and although the oysters and fresh crabs were delicious, at some point you crave for something different), the bands at most distillery-days were the same ones as the day before, with the same playlist, and don’t get us started about the queues for the festival bottlings, where possibly 80% of the people in the queue were thinking: “get as many festival bottlings as possible and sell them online as soon as possible”.

If - as a distillery - you want to toast with your visitors because you are having your umptieth birthday, it is easy to have some of the staff and volunteers go round with a bottle or two and make sure everyone has something in their glass (glass, and not plastic cup). Pulling up a tent or two and a table with some local artwork, does not make it a festival. People (well; we) want to be entertained, show them you are having a party and at least try to look happy when they come (en masse) to your distillery and pay very handsome amounts of money to attend one of your festivities or tastings. Give them something they expect - something special.

We think the Islay Festival of Malt and Music could do with a coordinating organisation, where itineraries can be chosen in advance, ordered in one location on the web and that first timers and veterans know where to go. When you don’t know any locals as a newcomer you are missing out quite a lot, just by not knowing where to look. There is a good example for this somewhere else to be found, although festivities there are somewhat different from the ones to be found on Islay. 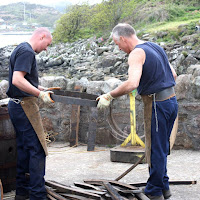 So. leaving behind all our sourness, we did have a good time on Islay, also during the festival. Most festivities were quite fun to be at, we got to see Jim McEwan say goodbye (again) at the Bruichladdich Hoe-Down, gave our friend a tour at Laphroaig, starting at the stills and working our way back to the malt floors, stuck our fingers in some butts at Bunnahabhain, and had a blast at Ardbeg. At Caol Ila we enjoyed the sun and shared some drams with complete strangers (still) and watched some coopers taking apart and rebuilding the same casks over and over again and two weirdos dipped some skin in the sea at Lagavulin Bay. Bowmore and Kilchoman (and Jura) are missing from this list, because of a small flu hitting the island and striking us down for a short while.

Most places we ate at, we ate really good and most places we drank at… Well there is an open door, kick it in yourself. Worth mentioning to go when you are on the island are Yan's kitchen, the Ardbeg Old Kiln café, the Ballygrant Inn, the Bridgend hotel, the Port Charlotte bar or the Cyber Bistro in Port Ellen, Oh, and don’t forget to stop for coffee at the Bruichladdich grocery store for the best coffee on the island. Talk to the locals, ask them where the best spots are and they will be happy to show you where to go, more often than not preceded by a great story.

So driving our car all over the island during the festival week we (again) realised we still had really only seen the distilleries, so it was high time to leave them behind us and get walking for a bit. We drove up to the Kildalton Cross, which is a great starting point of a beautiful hike, walked to Dunyvaig Castle close to Lagavulin distillery, discovered more of the Rinns of Islay, did some peat cutting and went to the North - West of the Island. Every day we noticed that we still just skimmed the diversity Islay has to offer, we just could not discover all of it in so little time. We just did not have the time to get to the mull of Oa, just like visiting Finlagan, with the ruins of the Lords of the Isles place of residence. We have really been trying to get more adventurous and get off the beaten tracks to wander over the island, but still there are still only a really small areas we have set foot on. Seeing the color changes in the water while driving past Loch Indaal towards Portnahaven, the green hillsides filled with sheep and cows, birds all over the place, and a colourful fauna behind you, we could write pages and pages of all the beautiful spots on Islay. 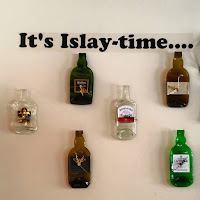 We are used to a busy and bigger cities, with people passing each other in a fast pace, not knowing much of each other, everybody seems to be in their own world. For us this is a place where we can breath a little and just sit down with someone for a cup of tea, just because you can. Shut up for a minute and take the time to listen. Even if it is just the sound of the rocks being washed and polished by the waves.

We want to discover more of Scotland other than Islay, but it has stolen our hearts for sure, and it's already pulling at us while we are leaving again. But there is so much more to discover, so first we will execute some other plans we are brewing on for a while now. Some of those places might even be outside of Scotland… Just watch this space...