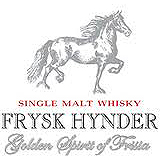 In october we visited the Us Heit beerbrewery, but also the place of the Frysk Hynder Distillery.
On the beermarket not a big player with 300.000 liters production. In 2002 they had the first new make spirit running. Ten years later they have become an interesting player in the Dutch whiskymarket with 10.000 bottles a year.

They use ex port, ex sherry, ex cognac, and ex wine. The Frysk Hynder goes in the barrel at 65% and they reduse it to 40% with bottling. They do as much as possible on site. After the tour and tasting we decided to travel to the Scottish restaurant de Koebrug in Stavoren for a dinner.

We ended up staying there the night in a b&b, so we could have a good look at their very nice whiskybar. Good food, drinks and people. If in the neighborhood, certainty something to do!